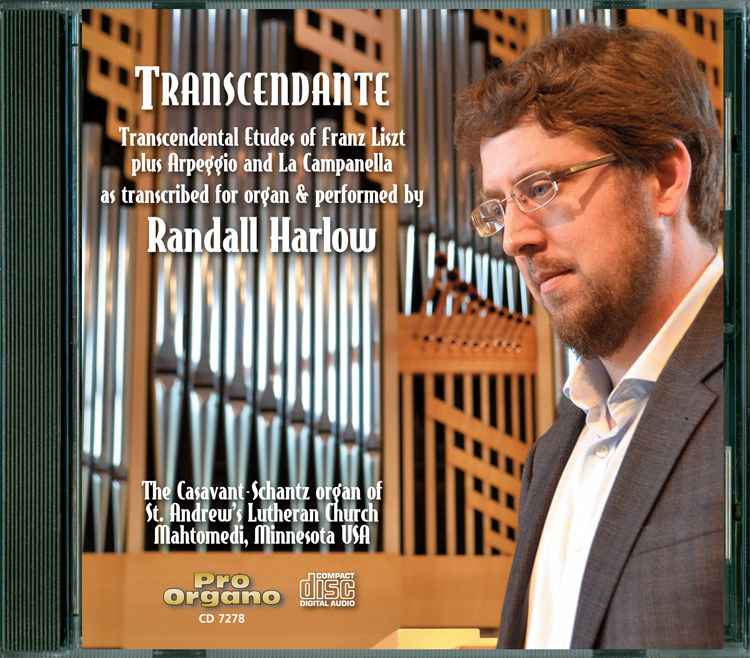 Randall Harlow, currently Professor of Organ and Music Theory at University of Northern Iowa, makes his debut CD release in March 2017 on the Pro Organo label.  Dr. Harlow’s organ transcriptions of the complete set of 12 Transcendental Etudes by Franz Liszt are paired with two of Liszt Paganini Etudes.  These works, known far and wide as monumental gems in the romantic piano literature, are highly virtuosic, and Randall Harlow approaches these works with great flair while preserving the musical gestures and augmenting the tonal colors in the original piano works.  He recorded these 14 Liszt etudes on the Casavant-Schantz organ of St. Andrew’s Lutheran Church in Mahtomedi, Minneosta (a Twin Cities suburb) in August 2016.   St. Andrew’s in Mahtomedi has been the venue for 3 previous Pro Organo CD releases by American organists Bill Chouinard and Frederick Hohman, and Australian organist Thomas Heywood.  The virtuosity in this new all-Franz Liszt release takes the capabilities of the modern pipe organ to its near limits.  The new release – which is entitled TRANSCENDANTE –  is to be released in both Compact Disc and MP3 Album Download formats on March 1 at ProOrgano.com.